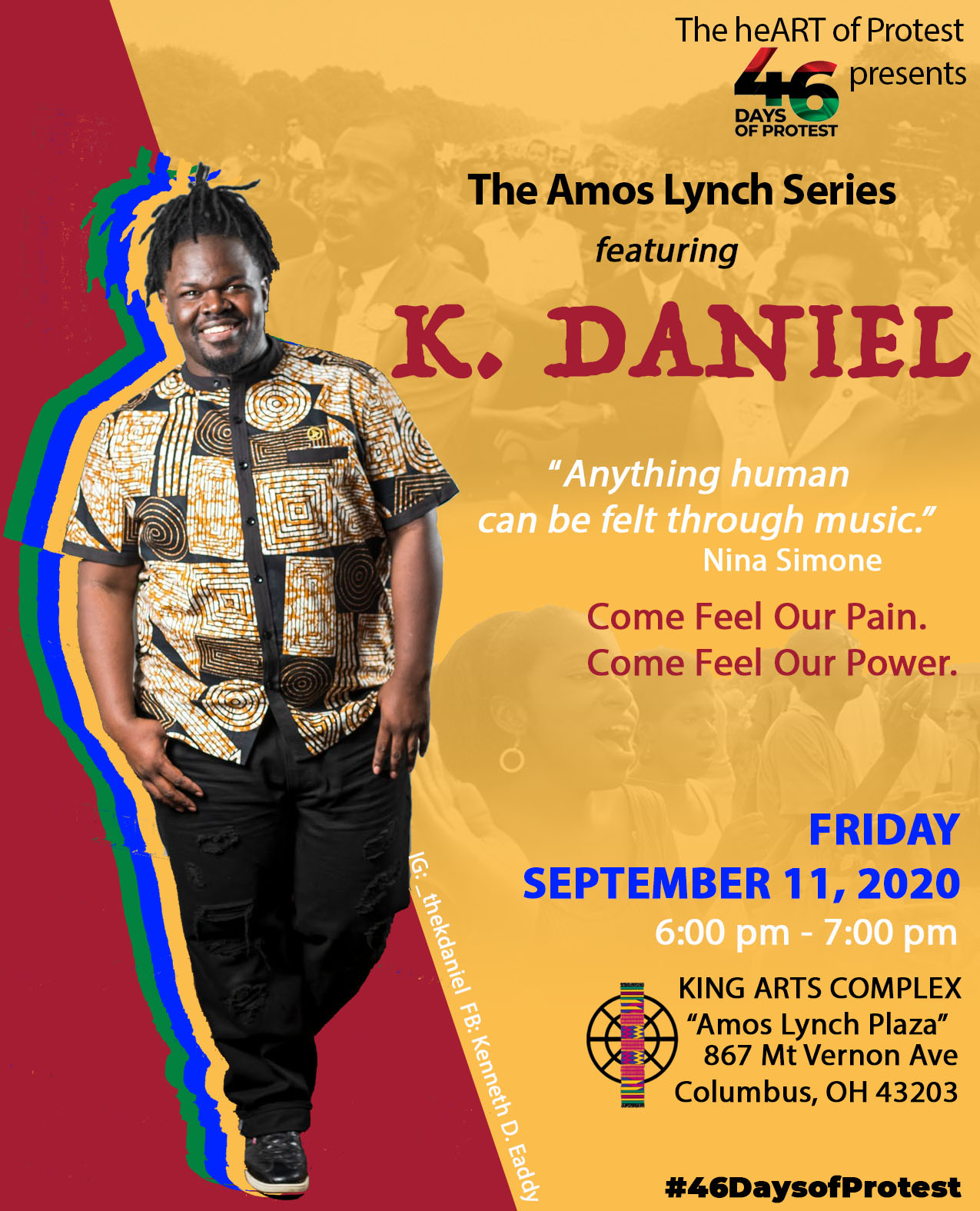 The Amos Lynch Series is simply an opportunity for the community to remain vigilant to the cause of racial discrimination, police brutality and murder, and human rights for people of color.

The Set: The Amos Lynch Plaza. This is an outdoor event and subject to weather. However, the goal is to perform 40 minutes of inspirational songs reminiscent of the 1960’s protest movement.

This event is invite-only and registration is limited. If you have not received an invite and still wish to participate, please tune into our Facebook and YouTube live streams.

Social distancing of six feet is required in light of the COVID-19 Pandemic. All attendees must wear face coverings. If you do not have a mask, one will be provided.

Kenneth Daniel Eaddy, known by his artist moniker K. Daniel, is indeed a tour de force: singer-songwriter, dancer and musical theatre actor. Originally from Cleveland, Ohio, he began to harness his craft upon moving to Columbus.

K. Daniel’s connection to The Lincoln Theatre is where the magic truly began. He graduated from an artist development intensive in 2015. The following year, he joined Thiossane (pronounced cha-sahn) West African Dance Institute, and has recently come back from a two-week long pilgrimage in Senegal and The Gambia, West Africa. In 2018, K. Daniel was cast in a reprisal of the Broadway play Eubie!, presented by CATCO, during the centennial celebration of the Harlem Renaissance, which earned him a 2019 Theatre Roundtable nomination for Best Featured Actor in a Musical.

This past September, K. Daniel showcased his love of arts into an emotionally charged monologue describing his life’s journey to a sold-out crowd on stage for the Backstage at The Lincoln Theatre series called Chrysalis Epoch. In February, K. Daniel was a featured vocalist bringing the house down at the Lincoln Theatre for Say A Little Prayer: An Aretha Franklin Celebration, a collaboration between Counterfeit Madison and The Wexner Center for the Arts.

K. Daniel’s mission is to bring a level of authenticity and originality to any stage he touches, and ensures that he can actively spark dialogue through all of his artistic endeavors by educating, engaging and entertaining his audiences.