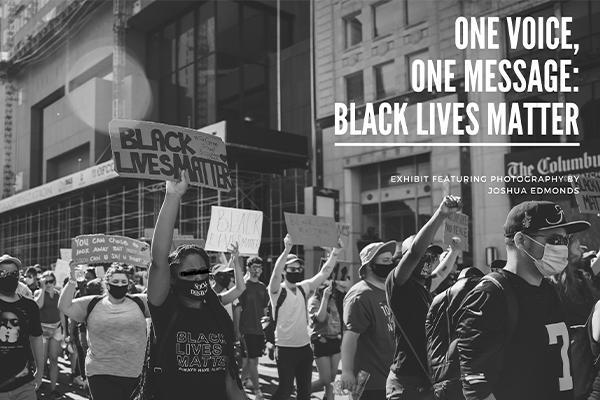 On May 25th, 2020, George Floyd, a 46-year old black male was killed in Minneapolis, Minnesota by a police officer who held his knee on Floyd’s neck for 8 minutes and 46 seconds until he was no longer breathing.

A video recording of this event went viral. And the world reacted. An all too familiar movement resurfaced and the shock, pain, and anger reverberated not just through the U.S. but the world. People took to the streets to protest, to be heard, to enact change.

This photography exhibition by Joshua Edmonds shares just a fragment of that reaction that took place in Columbus, Ohio the following days after George Floyd’s death.

Through marching, through art, through protest, community members came together to let their voices be heard as one. To echo the same message being shared around the world: BLACK LIVES MATTER.

The exhibition and related programming are part of an ongoing collaboration between Ohio State’s Frank W. Hale, Jr. Black Cultural Center, Office of Diversity and Inclusion, and Urban Arts Space. It is presented in conjunction with The HeART of Protest series convened by The King Arts Complex. More than twenty arts and cultural organizations in Columbus have teamed up for The HeART of Protest, which will include 46 non-sequential days of artistic protest determined by each organization to honor the 46 years of Mr. George Floyd’s life. This effort will be both a catalyst and a documentation of the global social justice movement that is underway.

Join us for a One Voice, One Message Webinar: Images and Power: Protest Photography and the Challenges of Representation on October 28 at 4:00PM.

Hybrid Arts Lab is a multi-venue teaching lab that experiments with how art is imagined, made, viewed and understood within physical and digital spaces. Venues include Hopkins Hall Gallery, Stillman Hall Tent, and online @ UAS from Home.